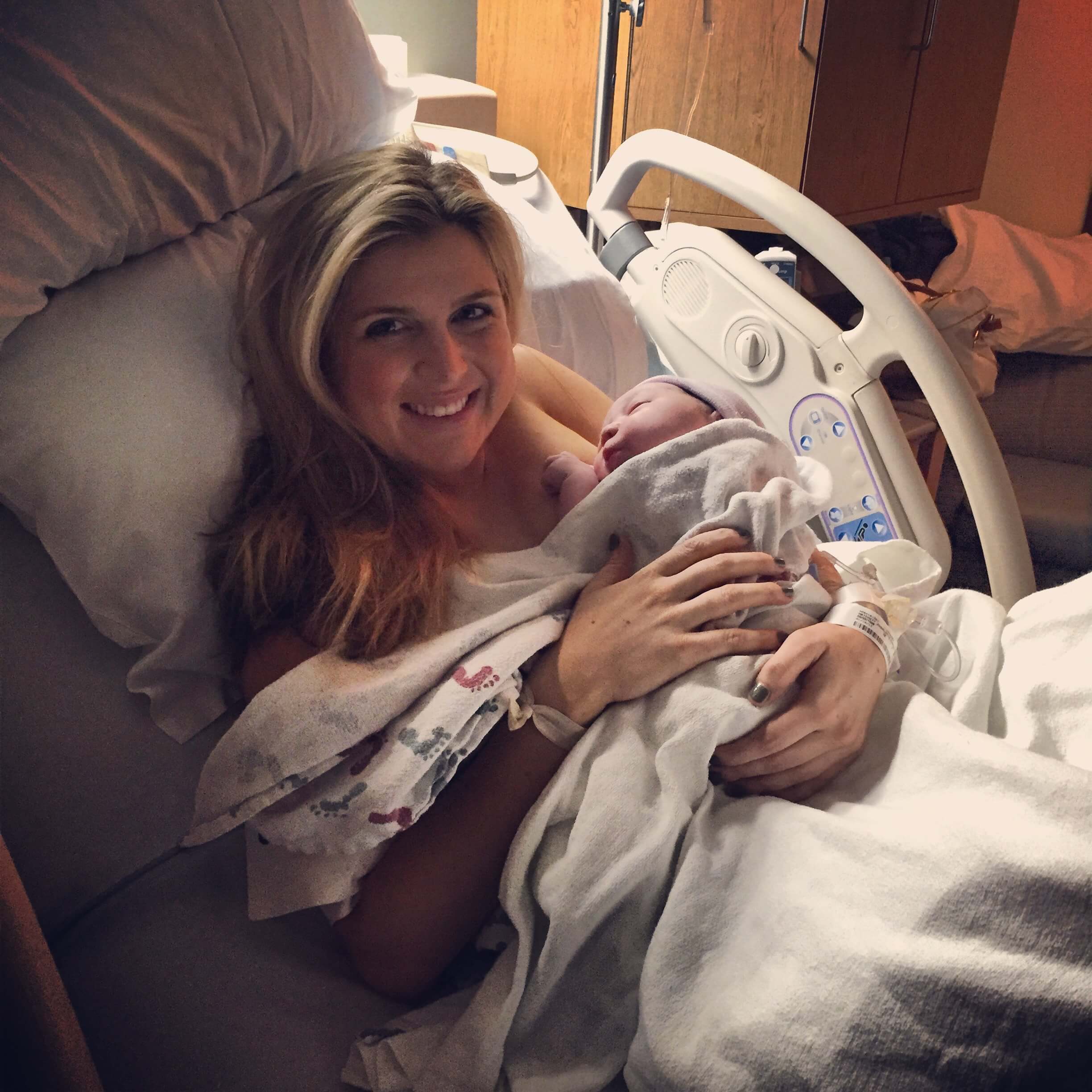 This week, my precious little B turned one and I’ve had the craziest time realizing that it’s been one whole year since that crazy day. My boy has lived outside in the world for an entire year. It’s only felt like a few days, but a whole year has gone by… unreal.

I’ve had several of you ask me to share B’s birth story and my experience with labor and delivery. I have to be honest and say that while it kind of weirds me out to share this on my blog, I read birth story after birth story when I was pregnant and they really helped me learn what to expect on B’s D-day. So I’ve decided to share our own birth story with you.

My pregnancy was a dream. I had morning sickness weeks 6-19, but never got physically sick… I just walked around in a state of nausea… Okay, I wouldn’t say pregnancy in general is a walk on cloud friggen nine, but in comparison to what some women experience, I’ll take 15 weeks of nausea any day and call it a dream. After that, the pregnancy was peachy-keen until halfway through week 34 when I first went into labor. Now, this began on a Tuesday. The contractions were mild, but consistent and, being at 34 weeks, they made me nervous. Three days and two trips into L&D later, I was admitted into the hospital for an IV of antibiotics and I was given medicine to stop my labor. I had an infection [baby was fine] and my body wanted to kick him out… he most definitely needed to cook longer. I was placed on modified bed rest [which aligned perfectly with Christmas break as a school teacher] and told to spend the holidays on the couch… riiiiight.

I did what I was told [with the exception of attending the Baylor vs Michigan State bowl game at AT&T Stadium] and after the two weeks of Christmas break, I was 37 weeks, full term, so my doctor said I was clear to go back to work! I went one day and that was it. 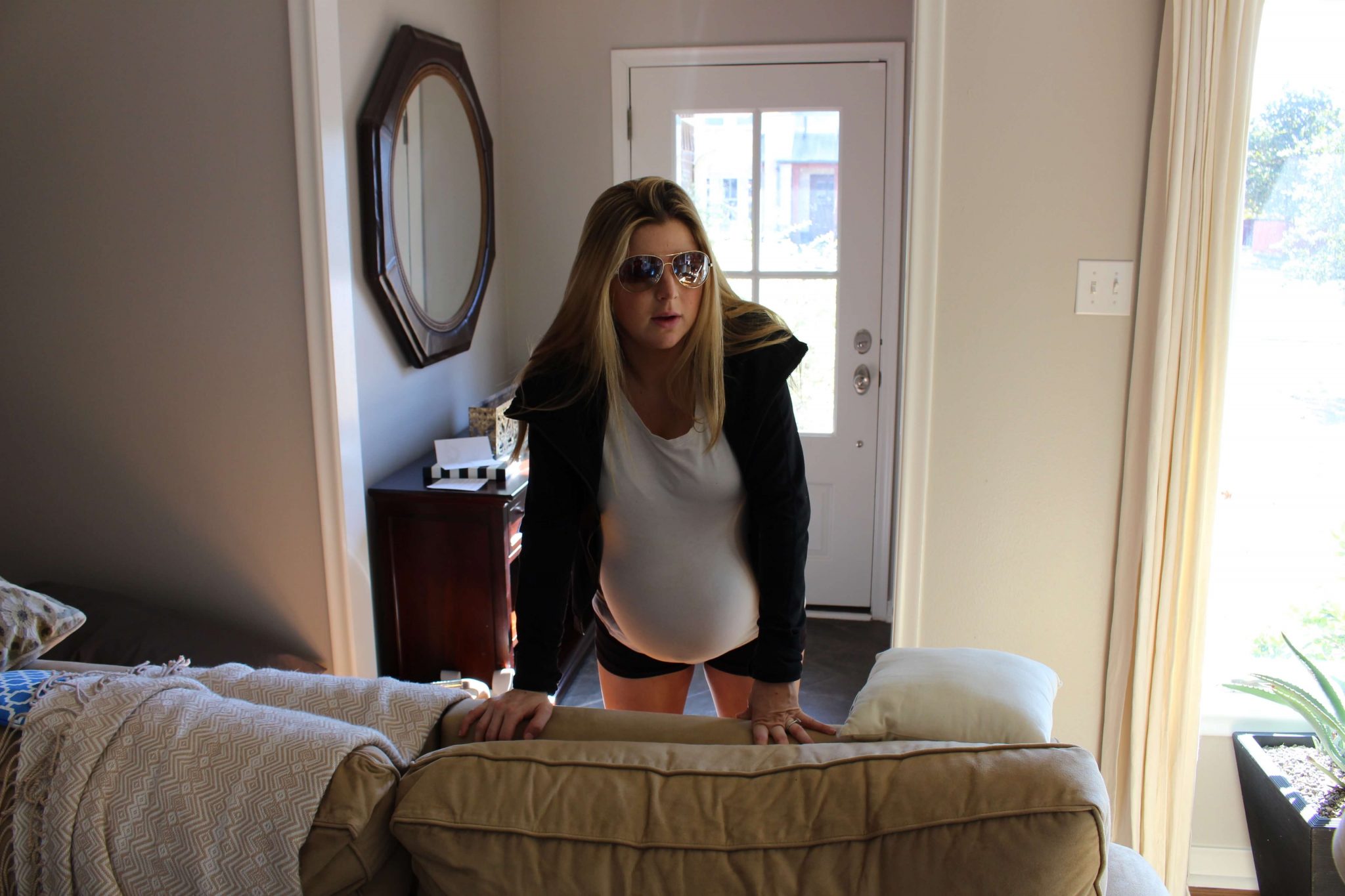 It was a dream-come-true for my students. Like, the perfect selfie scenario given to them as a gift from God. It was also this high-school-teacher-who-was-REALLY-PREGNANT’s worst nightmare. The contractions started around 10:42am… right before 2nd period ended. They were about 10 minutes apart, but pretty consistent. I waited and timed them while my students worked on whatever worksheet I gave them and they got closer and closer together. By 1:00pm, they had been 4 minutes apart consistently for an hour and I decided that I needed to get home ASAP because I was NOT about to do this at school. The assistant principal came in with a substitute, took a photo with me and I was on my way… the kids LOVED it. Oh the drama.

The 30 minute drive home was probably the stupidest thing I’ve ever done. Y’all… they tell you not to drive drunk… yeah, don’t drive while in labor either. I got home, practically fell through the door, called F and told him that he needed to get home from work [his office is almost an hour away, without traffic] and I hopped in the shower. This made the contractions feel worse. Showers, apparently, speed up contractions. So, I got in the bathtub and they got better! I was like, hey! I got this!

After a soak, I got out of the bath and started getting prepped for a long night and an eventual trip to the hospital. I noticed that my contractions had slowed down significantly… like, they were happening every 10 minutes… then 12, then 16 minutes apart. I sat on the birth ball until they eventually didn’t happen anymore. I had been in BIG TIME PAIN for hours and then… nothing? WHAT!?!?!?

F and I made dinner, I  tried dancing and squatting and we went for a walk, trying to get them to come back and… nothing. Until 3am.

They were back FAST and FURIOUS at 6 minutes apart, I was back in my painful, contraction-laden state and I just knew this baby was coming. When 6am rolled around, I was in full-blown labor. The contractions were 4 minutes apart and I was on all fours in the living room, breaking only to get on the birth ball. Around 11am, they had slowed down. At 1:00 they were back again and we were on our way to the hospital by 4. Our families had already begun driving to Dallas and everything. They were one on top of the other when I arrived at L&D and I was crying pretty hard. I could barely walk myself in. I got checked in and back to “triage” when BAM! They stopped. Again. Let’s just say, after over 24 hours of labor, a trip to the hospital and our families having driven all the way to town, I was DEVESTATED when they sent me home without a baby. My doctor told me I was experiencing prodromal labor and that, unfortunately, they couldn’t induce me to keep the labor going because of hospital policy, so it would be a rough couple of weeks for me.

I couldn’t go back to school because the contractions would begin randomly and build until they were unbearable and then stop all the sudden. I had anxiety that I was going to miss the real deal and just assume it was prodromal and have the baby in my bathroom or in the storage closet in the back of Ginger Thai or something… I was just miserable. The hospital had a policy that there would be no inductions before 39 weeks, which is wonderful, EXCEPT WHEN YOUR BODY IS CONVULSING, TRYING TO GET THIS BABY OUT!!!! All of this and I was barely dilated to a 2.5.

At exactly 39 weeks and 1 day, I checked into the hospital at 9:00pm to begin “cervical ripening” before my induction at 6am the next morning. I kept telling F that I truly did not believe that we would walk out of the hospital with the baby in our arms. I was certain I’d go home pregnant again, even though I KNEW I wouldn’t. They inserted the prostaglandins at 11:00pm, the contractions started up BIG TIME [whoop-dee-friggen-doo, I’ve been there before] at 11:30 and my water broke around 3:00am. After that, it was FULL-THROTTLE. The contractions were one on top of the other. I barely got a break. The nurse kept asking to take me down to L&D so I could get an epidural. I told her no, that I would wait until 6am, like we scheduled. 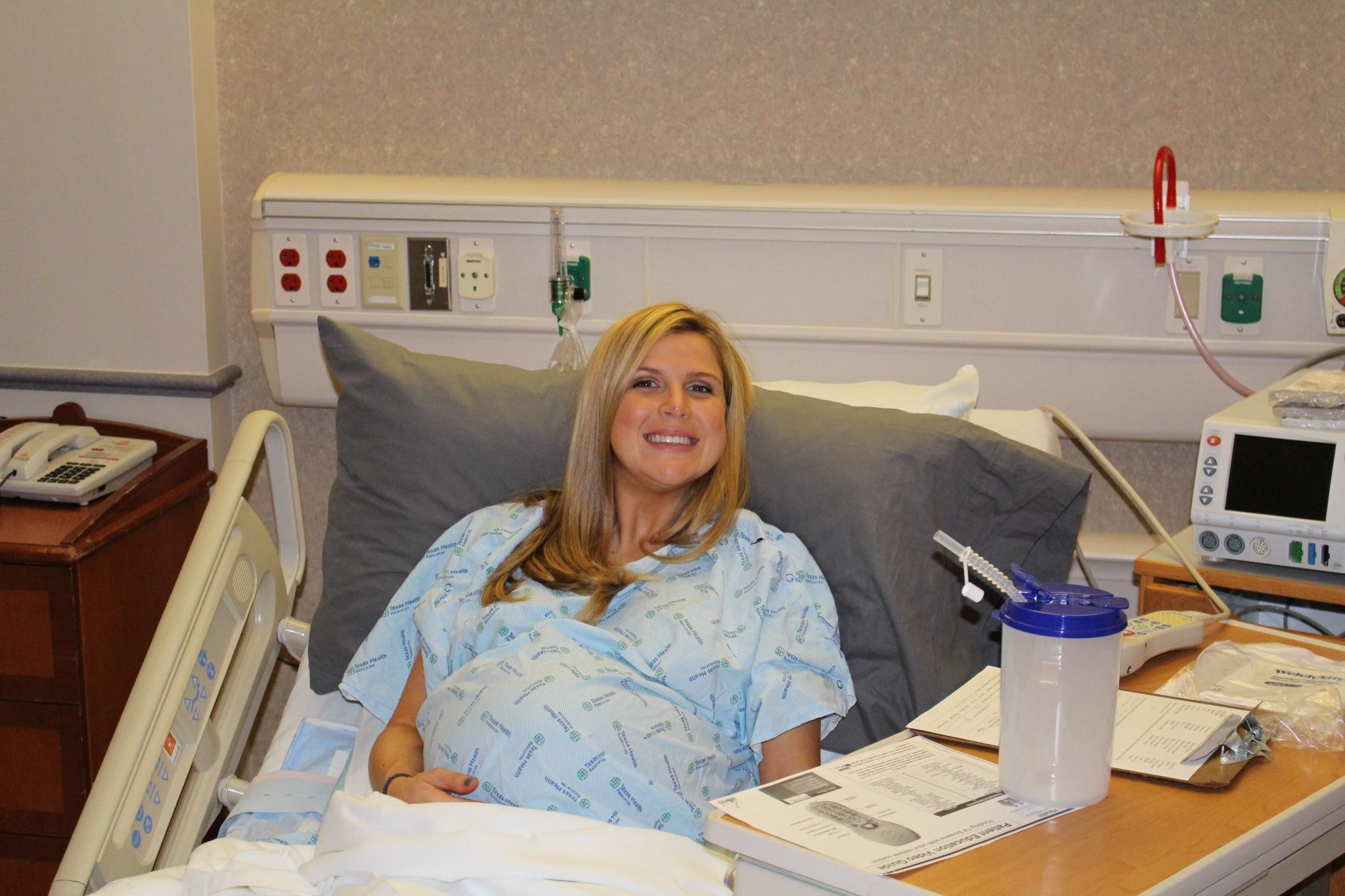 At 6, we went down to L&D. I was in some sort of state. It’s all kind of a blur. They checked me and I was certain I’d be a 9… an 8 at the worst, right? Guess what? I was a 2.5. I’m pretty sure I yelled “WHAT THAA?!?!” I know tears ensued. I heard my doctor tell my nurse that I needed some pitocin because I was on a time crunch now that my water had broken. When I heard that, I was like “GET ME THAT EPIDURAL. I HAVEN’T SLEPT IN TWO WEEKS. I’M TIRED OF BEING IN LABOR. I WANT THIS BABY OUT!!” [I think it was something along those lines.] I got the epidural and it was like heaven’s sweet, sweet nectar and I finally did something I hadn’t done in weeks… I slept. 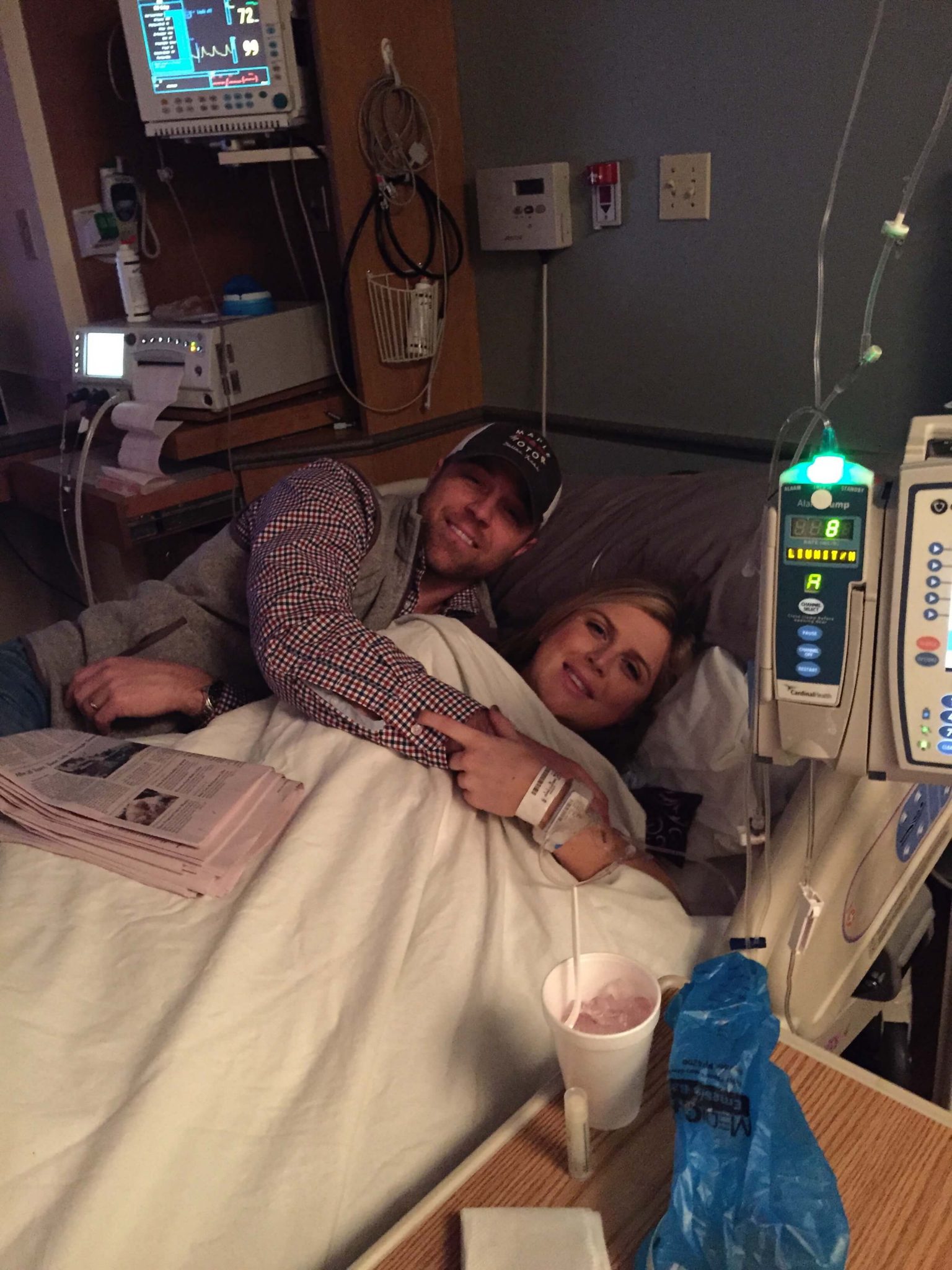 My whole family came… all of my sisters, my brother, my mom and dad. F’s mom came too. At noon, I was still barely a 4, so my doctor told them all to go and enjoy lunch and that we’d be here a while. An hour later, I felt pressure. I knew my epidural was starting to wear off, which I was okay with because I wanted to be able to walk right after. I also had this weird wanting to feel everything. I don’t know… maybe I’m insane. Yeah, I think I am. I felt the urge to push… like I NEEDED to push. I was gonna go ahead and push… She laughed at me and told me that it wasn’t necessary to check, but I begged her… something felt different. She obliged and as she checked I watched her face turn to shock… “Yeah… you’re a 9.5. I’m going to call the doctor and prepare for delivery.” F called my family to rush back from lunch… it was go-time. Seriously? After ALL THAT, he’s ready in like… uh…. 30 minutes?! WHAT?!?!? Crazy baby! 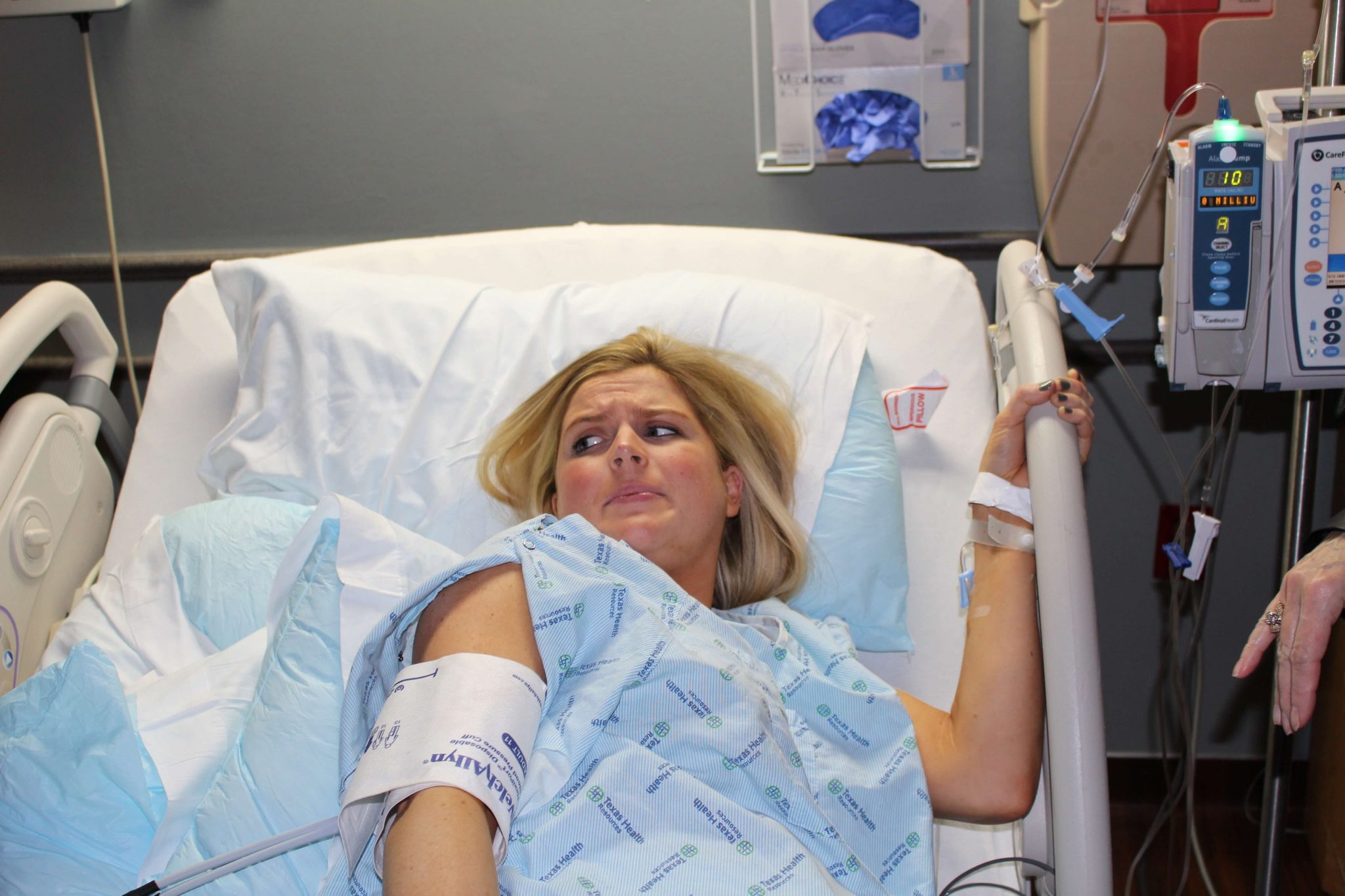 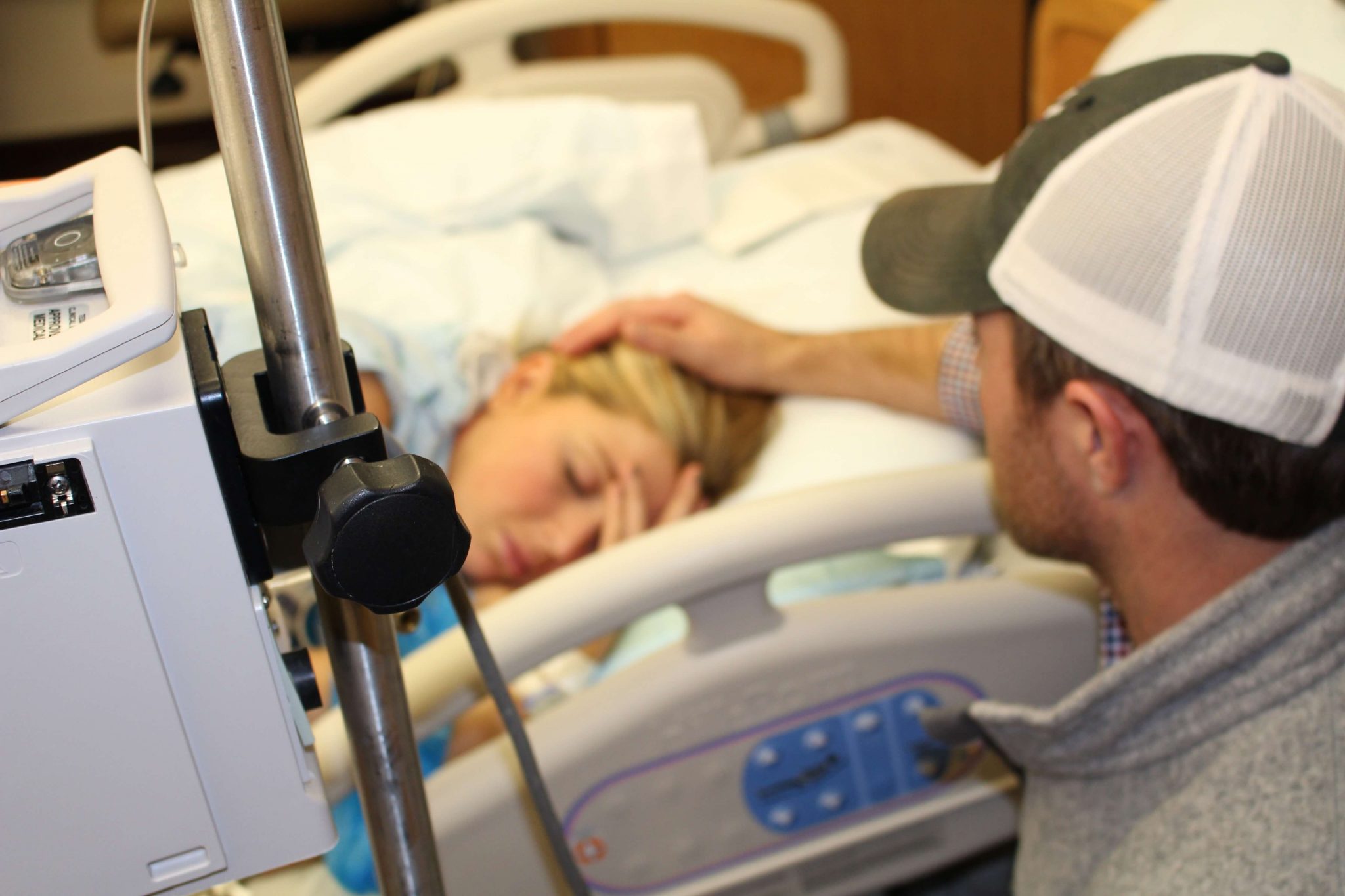 It took almost an hour for me to move from a 9.5 to a 10, but my epidural was quickly wearing off and that hour was PURE TORTURE. The pain was bad, but the worst was not being able to push when I needed to. It took every ounce of power in my being to just let the contraction happen and not push! Finally, it was go time. Fun fact, my sisters, mother in law and mom tried to leave, but my doctor told them that they were about to miss the best part! I had a crowd of cheerleaders encouraging me with each push! It was awesome… and also weird. Like, really weird. But it made for some hilarious photos! 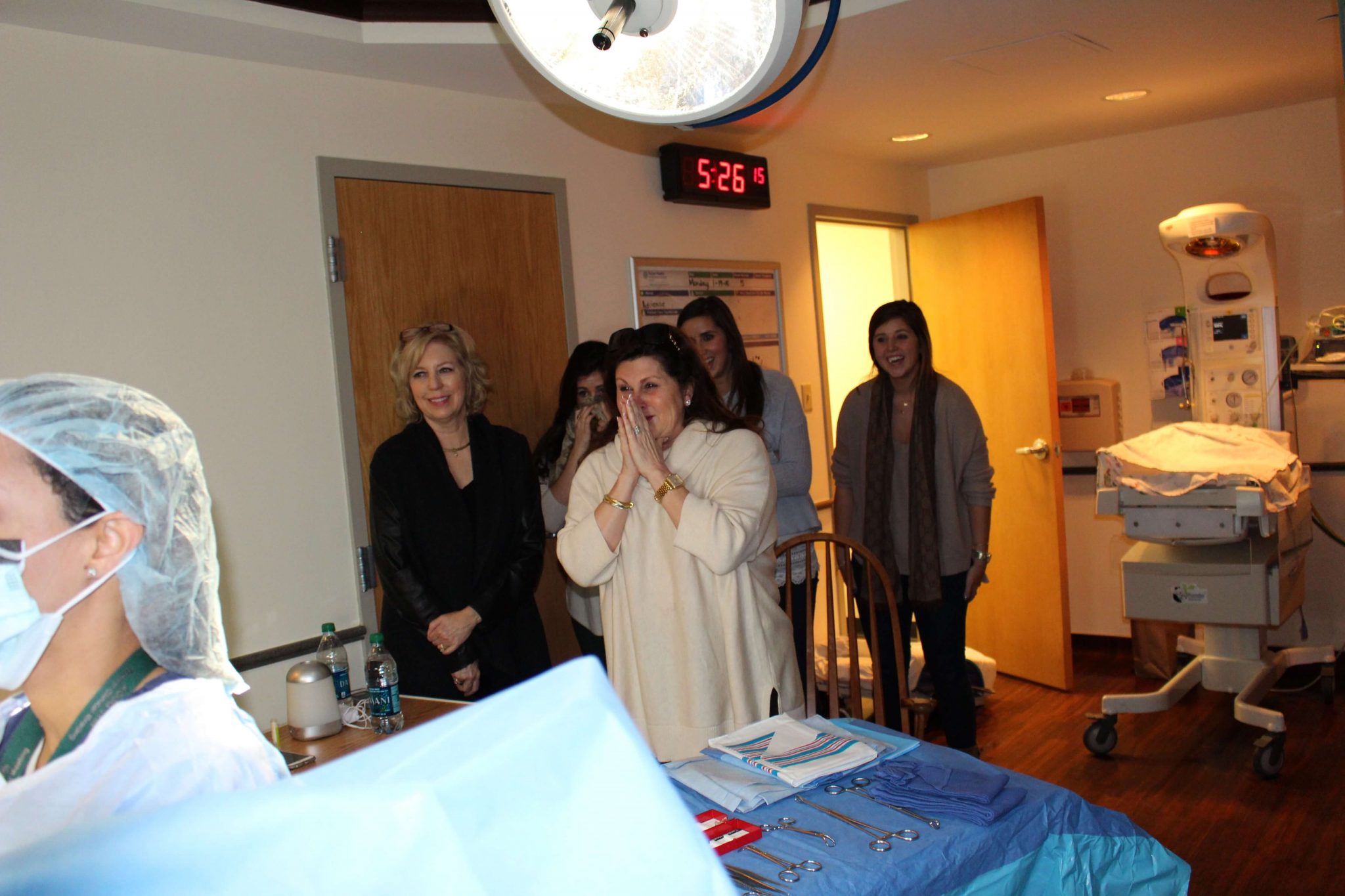 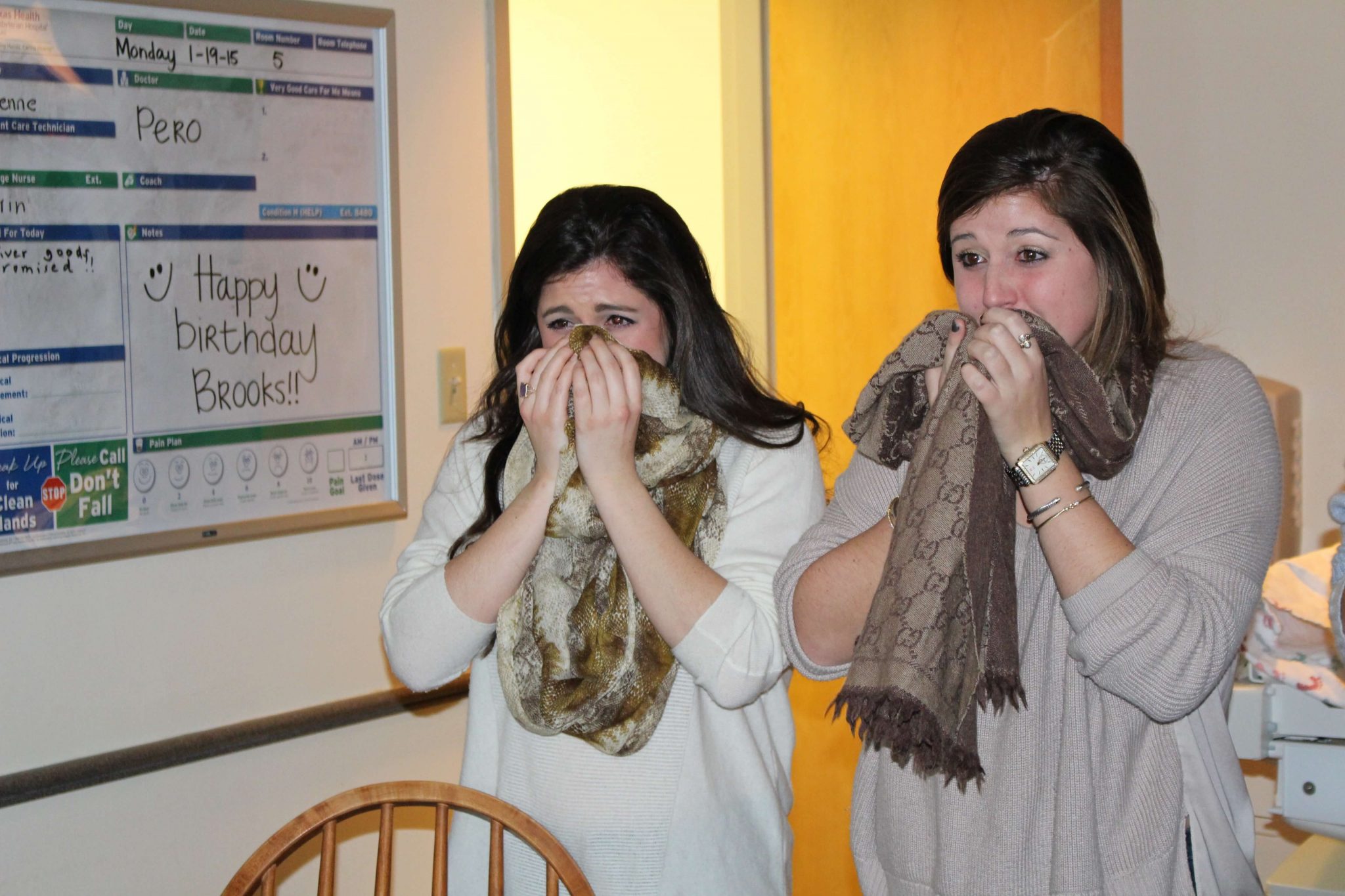 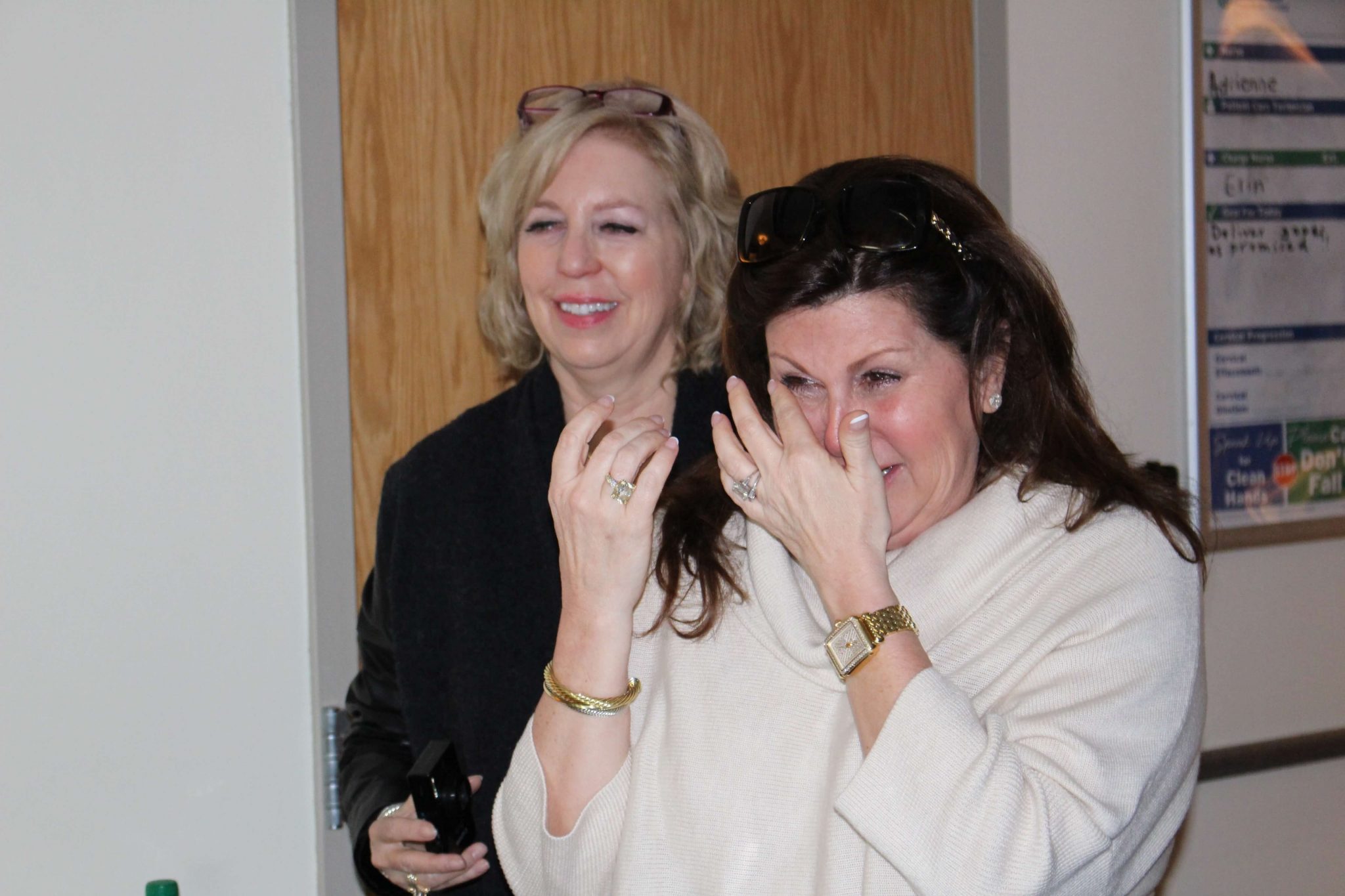 I pushed for 45 minutes and my boy was born at 5:28pm. The feeling you get when that baby is born is unbelievable. He was perfect. Suddenly, it was all worth it. The pain, the sleepless nights, the contractions, the trips to Labor and Delivery to leave empty-handed were all worth it. After stitches and cuddles and tears shed by me and F, my family came back in to meet the newest member. It was one of the greatest moments of my life. I was exhausted AND invigorated all at the same time. 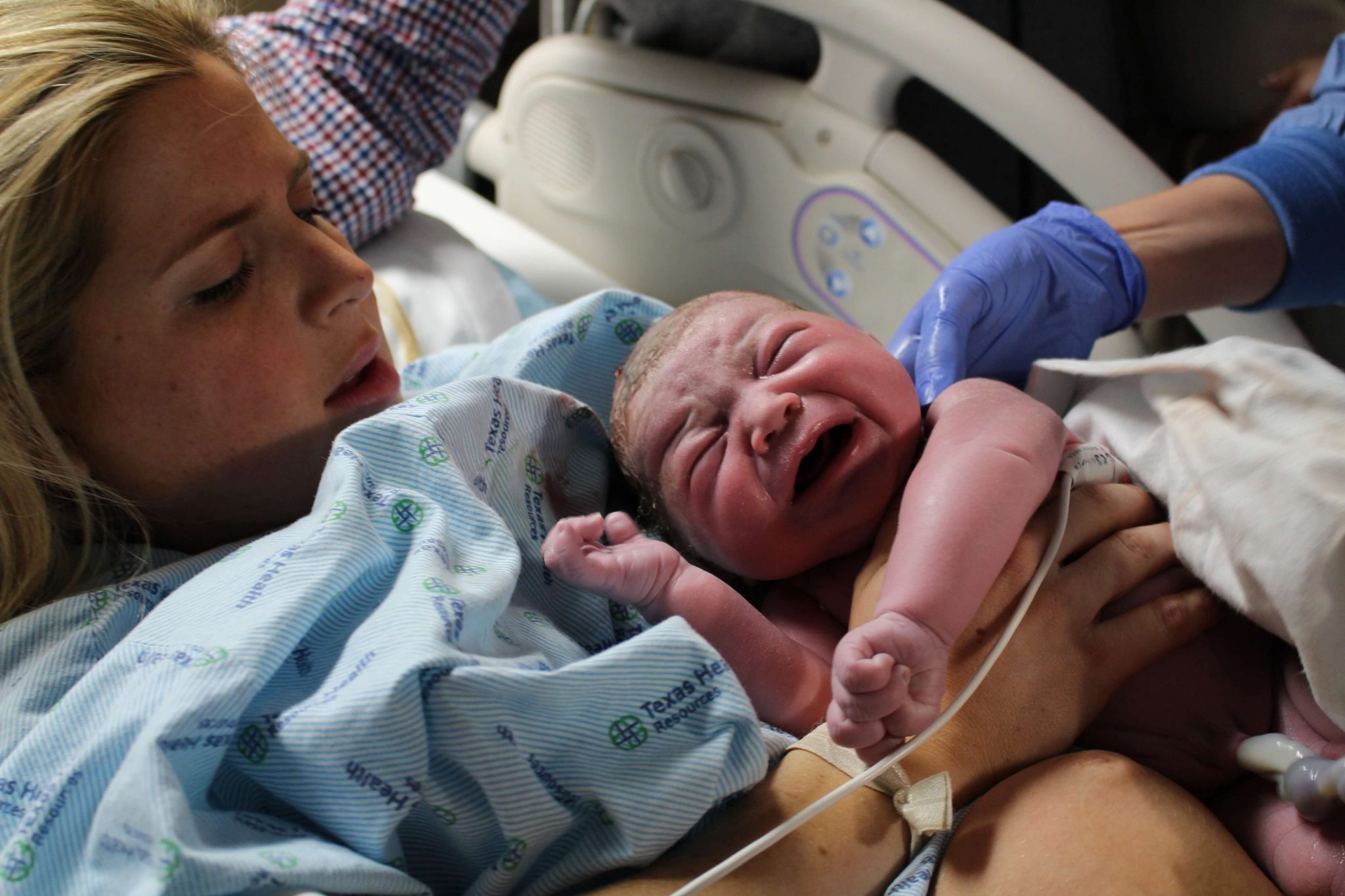 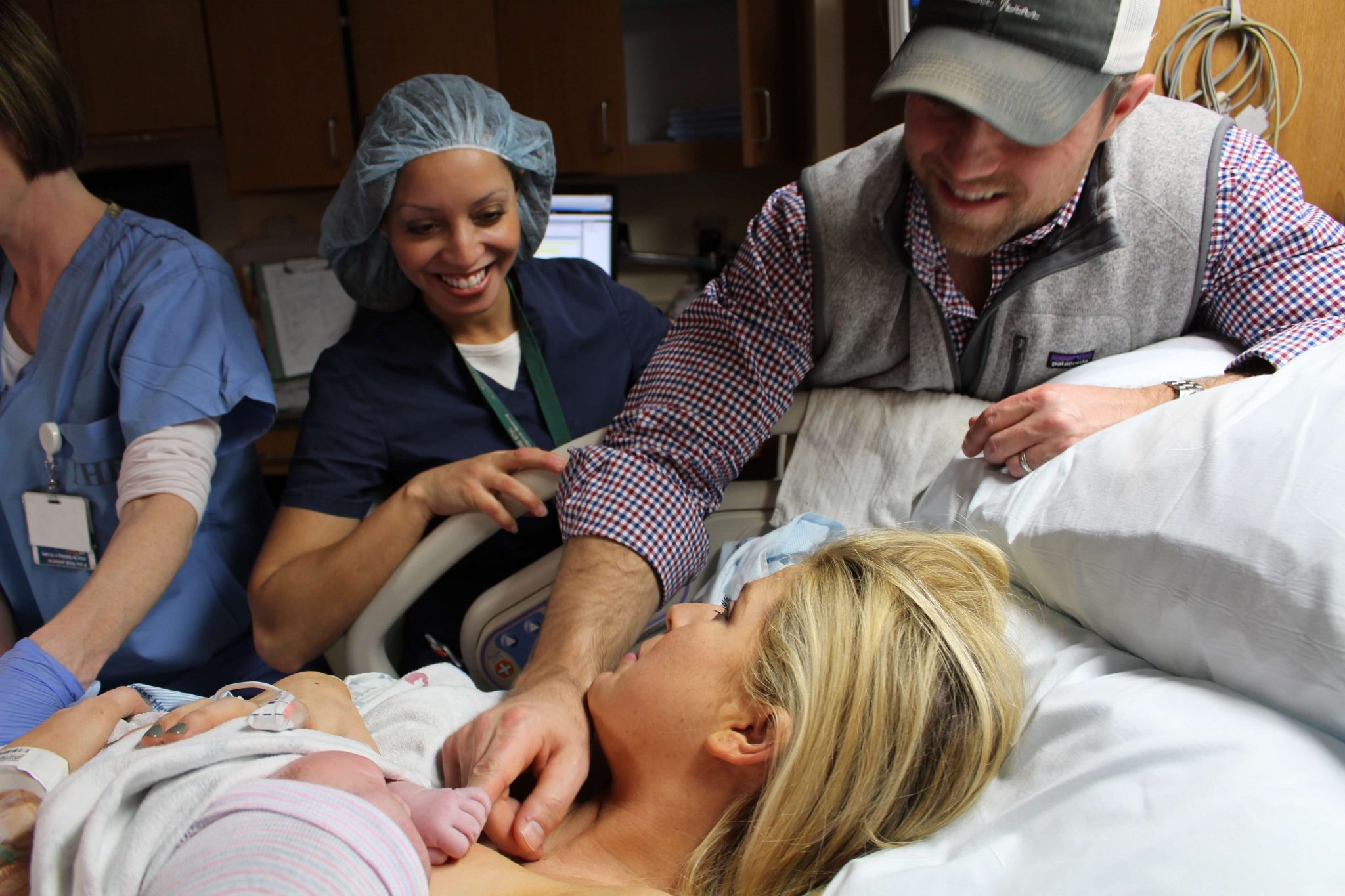 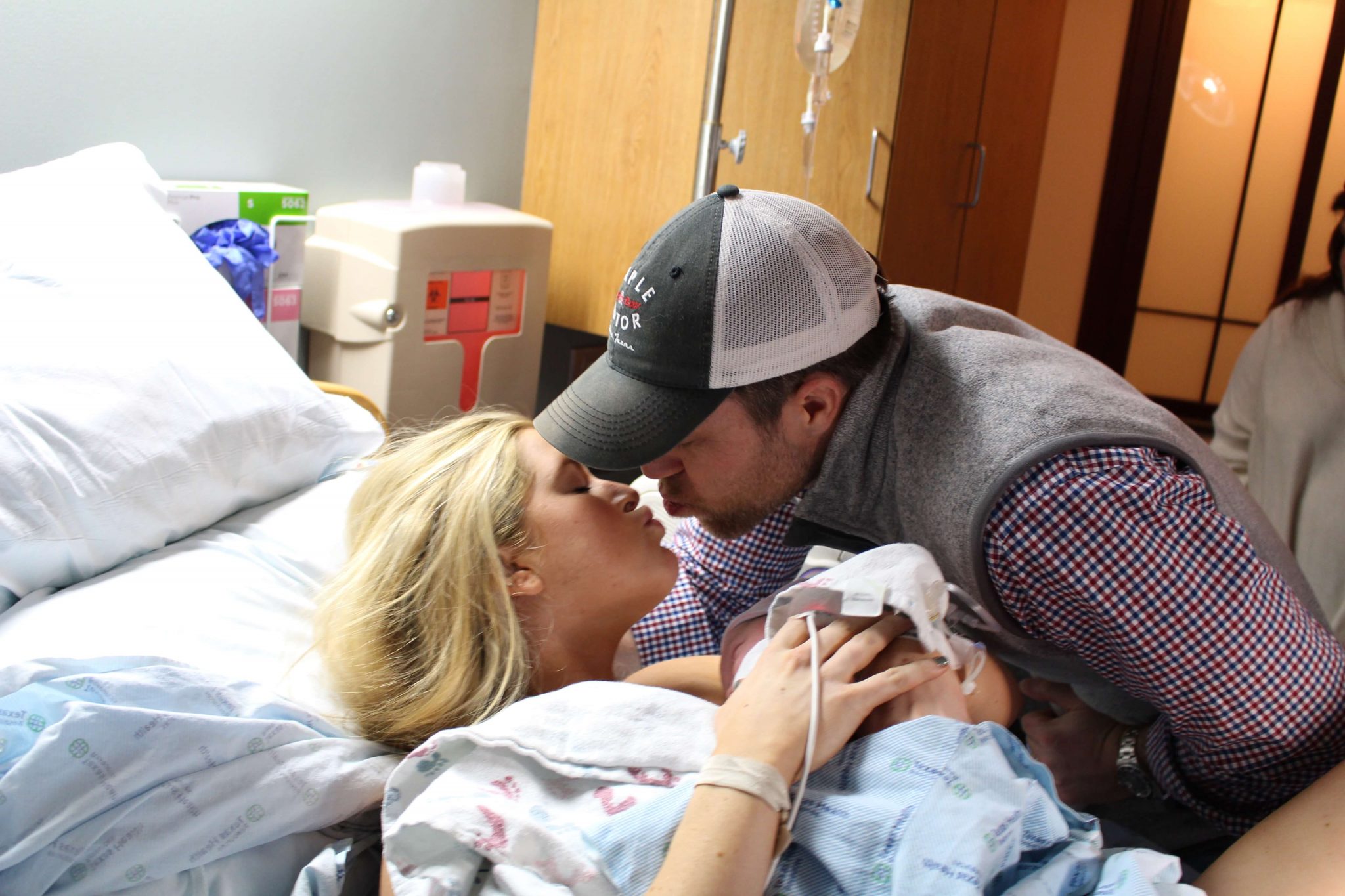 I can’t believe it’s been a year. I am just in awe. B’s birthday is always going to be a celebration for him, but secretly, I’ll celebrate myself and the day God gave me the greatest title I could ever have; mom.