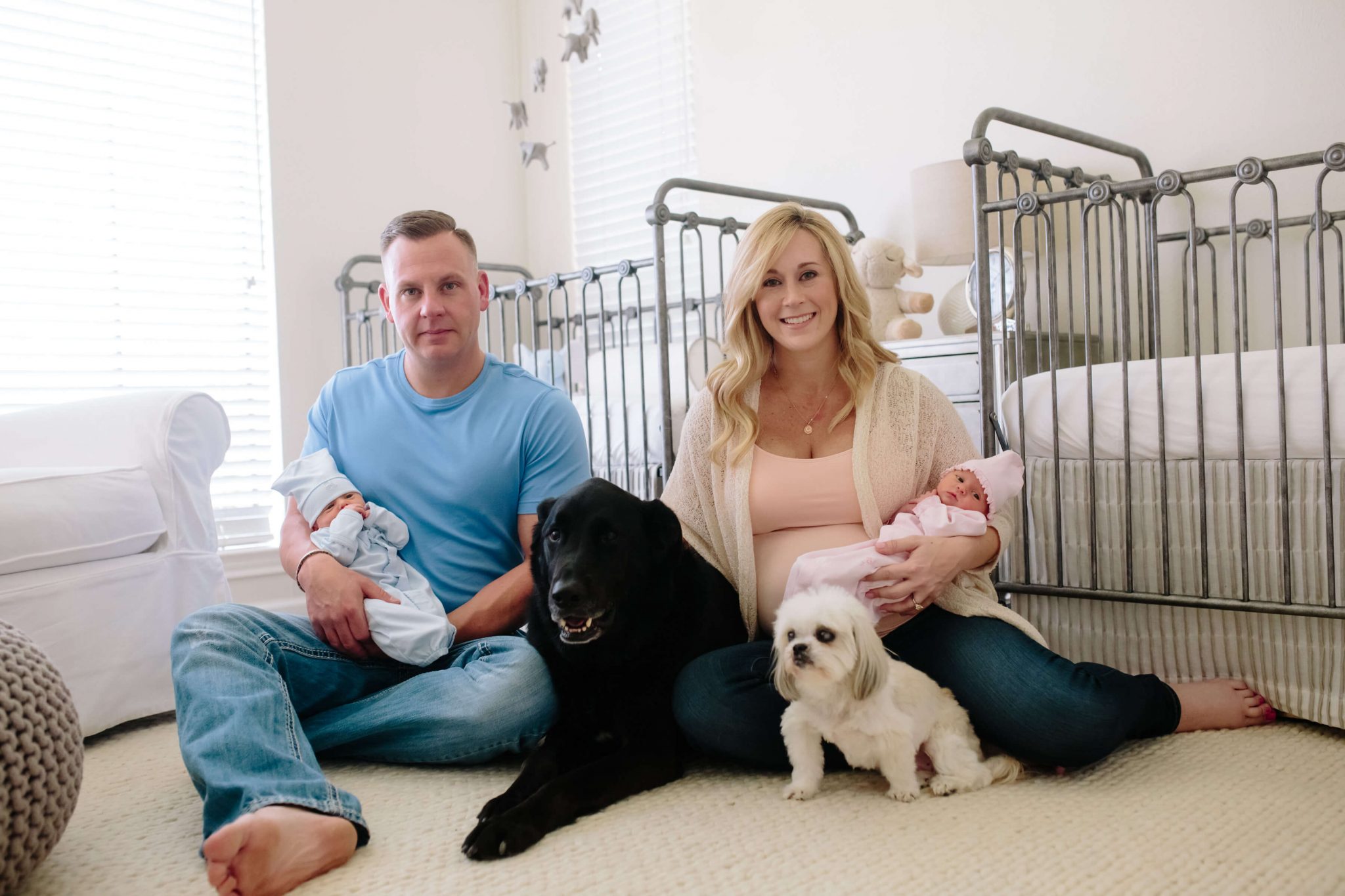 When I first agreed to share my story of becoming a mom I thought I would just sit down and knock it out because there is just SO much to share.  After half a dozen attempts to put that journey into 1,000 words or less I realized I didn’t have a clue where to begin or what to share. I do not have adequate words to express the all consuming joy, heartbreak, love or grace that has been my life for the last two years.
I suppose I’ll just tell you my story and hopefully it will all come together.  My husband and I were engaged in October of 2014 and married the following March.  We actually dated in high school and our families have been friends for a long, long time.  He is a persistent fellow, and for that I am thankful.  That same March we sold my house in Lakewood, purchased a new house, did some remodeling, moved in April and then set off to Greece for our honeymoon in May.  By the end of July 2015, we were in the sonogram room listening to the sonographer explain how the little flickering spot on the screen was a baby!  Not two seconds later Justin then pointed at another flickering spot…”if that is a baby, then what is that?”  To which she replied that’s another baby!  Between us, I had always wanted twins.  Specifically a boy and girl.  I thought it would be awesome.  I was right.
In that moment I giggled (hysterically), and by the time we were back in the car I was petrified.   Little did I realize how every moment of my pregnancy was going to be simultaneously filled with both pure joy and shear fright.  This was our second time expecting.  The experience of losing our first baby boy at just 10 weeks has left a permanent scar on my soul.  I rejoiced at every cramp, kick in the ribs and hormonal breakdown.  It meant I was still pregnant.  I was secretly ecstatic that I had to see a specialist in addition to my regular doctor visits.  That meant reassurance as I was able to “see” the twins more frequently.  I prayed, constantly, for my babies.  And I still do. 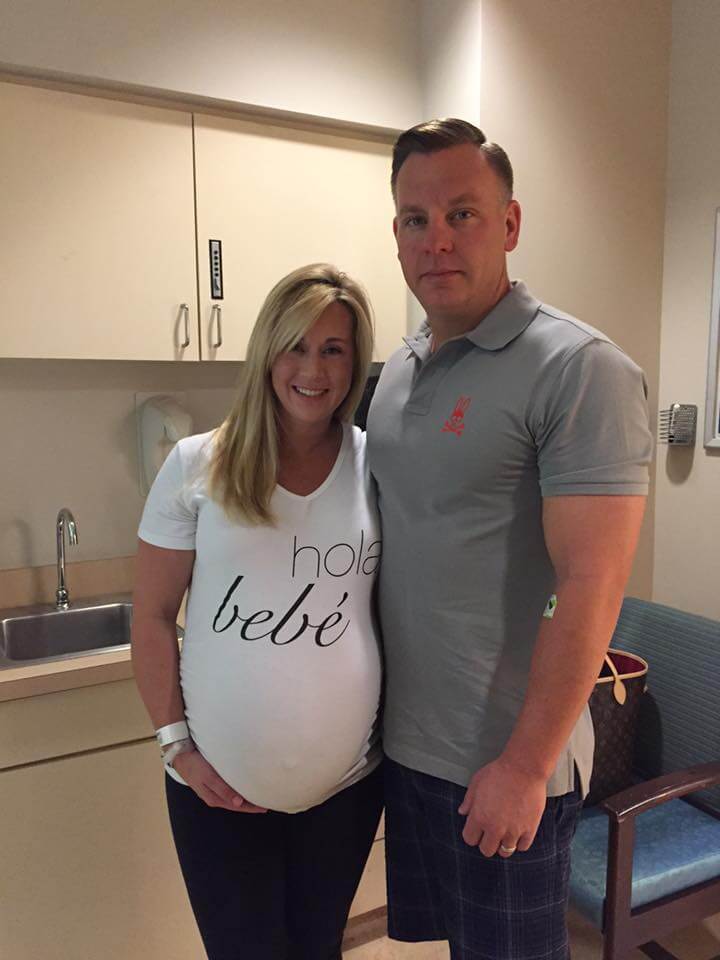 Besides being in the lucky “over 35 club” there was nothing crazy about my pregnancy… I mean, besides twins.  Early in my pregnancy I experienced some spotting, which because of our miscarriage sent me straight into hysterics.  I was told to put crossfit on ice (because I now had a “history”) and I was amazed at how quickly the little hills on my daily walks started to feel like I was training for Mt. Everest.  I literally nodded off at my desk mid-mouse-click once (maybe twice).  I happily put on 45 pounds and took dozens of videos of the twins doing the wave in my tummy.
A day after my first baby shower, at 29 weeks and 5 days, I went in for a regular visit with the specialist.  Everything was perfect.  And then I mentioned having a weird feeling, almost like cramps in my lower back but not really even enough to feel like a cramp.  She got out the “magic wand” to take another, closer look at things.  I was then ushered downstairs to my ob/gyn, who is also a dear friend.  Dr. P hooked me up and informed me I was absolutely having contractions – how on earth could I not feel those?!?!?  From there it was straight down to admitting. Do not pass go.  Let me just tell you – people think bed rest is SO AWESOME.  It’s not.  You start thinking about just how tiny they are and what happens if they insist on entering the world.  You go on a NICU tour (because in theory that will calm you down).  The nursery isn’t finished, you have a thousands projects to wrap up, you haven’t even packed a hospital bag because, hello, you haven’t even hit 30 weeks yet. For a gal who likes to have a plan – it was torture. Not to mention I watched the entire season of Mozart in the Jungle the first two nights because I couldn’t keep my mind straight long enough to start a book.
After promising, pinky swearing, begging and pleading that I would absolutely behave if I got to go home, I went home on day eight.  There’s nothing like a tour of the NICU and the idea of six more weeks in a hospital bed to get you to comply to doctors orders. Thankfully we made it to 37 weeks, exactly.  At 7:45 a.m. James entered the world and Josie followed her big brother at 7:46 a.m.  My entire world shifted, and it is amazing.  I love every minute with James & Josie, even the tough ones.  When I was pregnant I savored every single moment because it was/is the one and only time I will ever experience that.  I feel the same way about this part of the journey.  These moments are just a blip.  I will never again watch in awe as my babies grow eye lashes, cut their first teeth, or coo for the first time.   I’ll never again see the awe and excitement in their eyes as they first made eye contact with each other, recognizing the other and reaching out for each other. 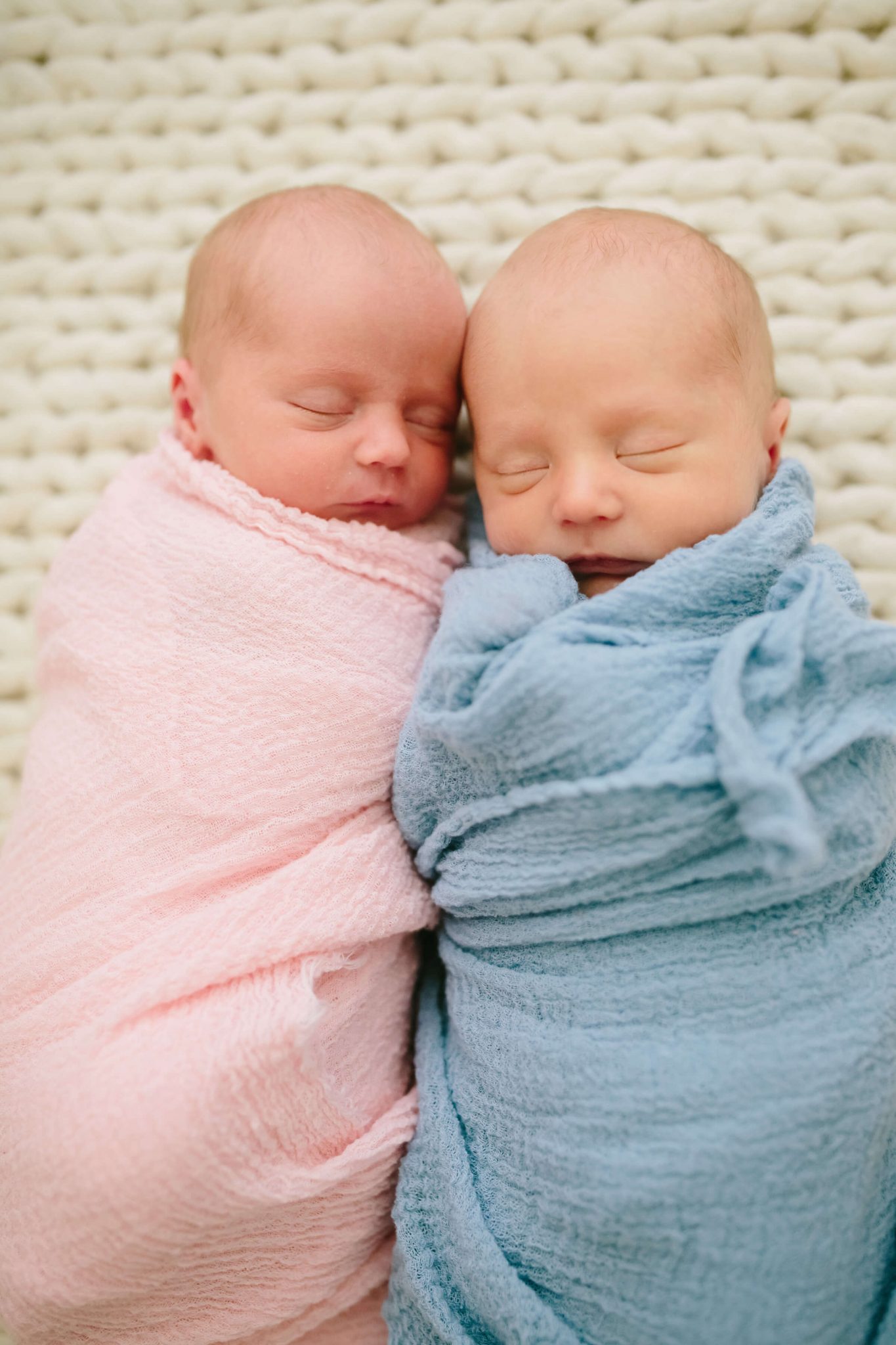 If I could tell you anything, it is that words are powerful, especially when you are waddling around or on the verge of crazy from not sleeping.  I have some amazing friends who were my personal cheerleaders.  I encountered strangers who offered compliments telling me “great job mom” (they didn’t know me from Eve but they knew the importance of raising up a new mom).  I have family who did laundry, dishes and fed my fur babies.  A village of people kept us fed for three months.  I know now that I failed basically every friend I have who gave birth before me.  Had I known, I would have bombarded them with far more supportive words and acts of kindness.
Shortly after James & Josie were born my dear friend, and the woman who first greeted my babies, gave me the greatest gift in the form of a compliment.  She told me that I handled my pregnancy, and being a new mom of twins, with Grace. She probably has no clue how impactful that moment was, and is, for me.  Grace is my new life goal.  The majority of time I am, in fact, not a graceful person.  I certainly haven’t come close to grace on those 2 a.m. mornings when I thought I might actually cause serious bodily harm to my husband.  Or the five times I had to walk outside to catch my breath when two babies were screaming and I couldn’t figure “it” out. But each day I wake up to two perfect faces and I am reminded of God’s grace in my life.  Without the most difficult and heart breaking moments, my life would not be what it is today.   I would not have witnessed how my husband would love me through the darkness.  I wouldn’t have welcomed the pains of pregnancy in the same way.  I wouldn’t have James + Josie. 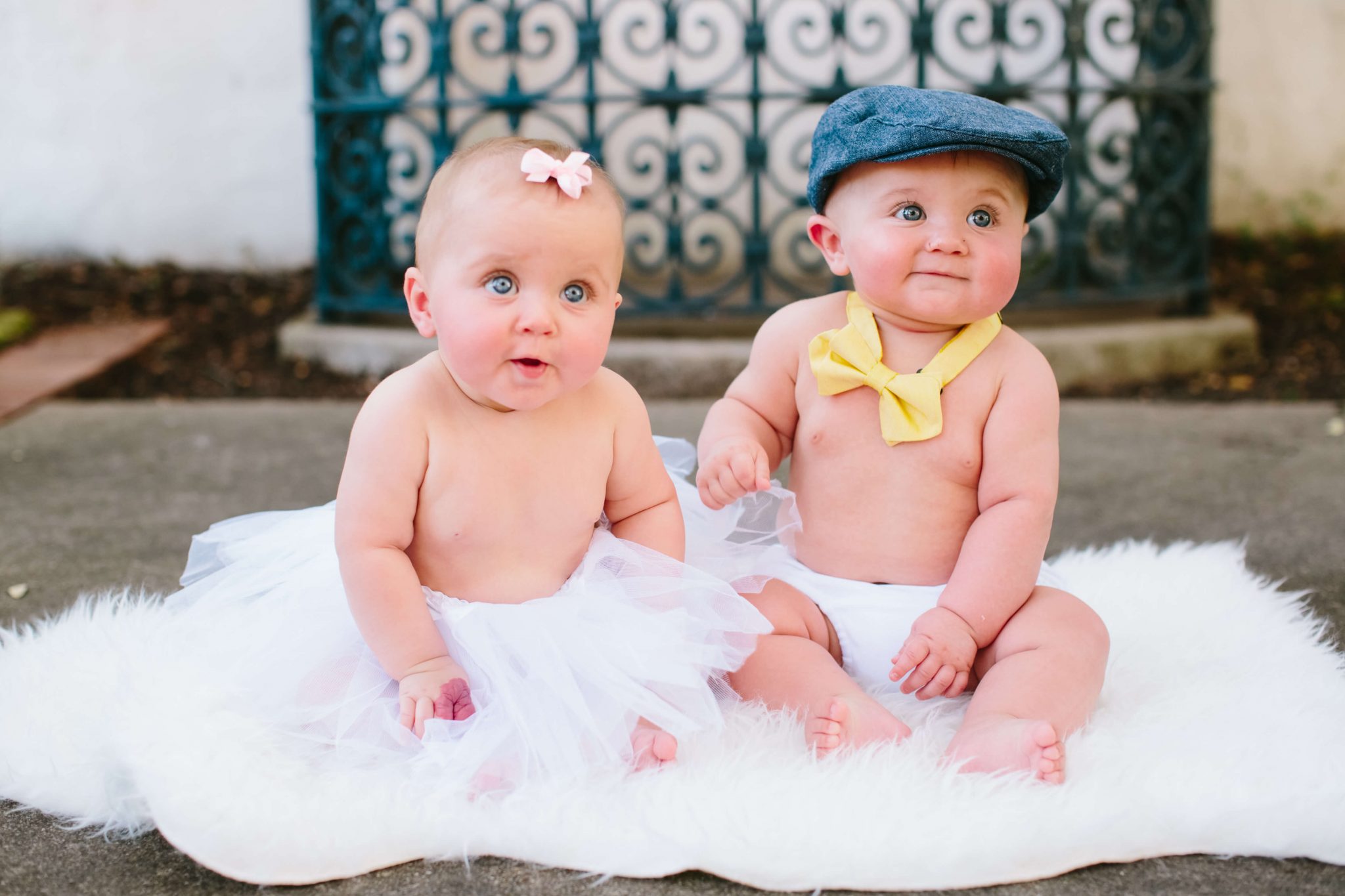 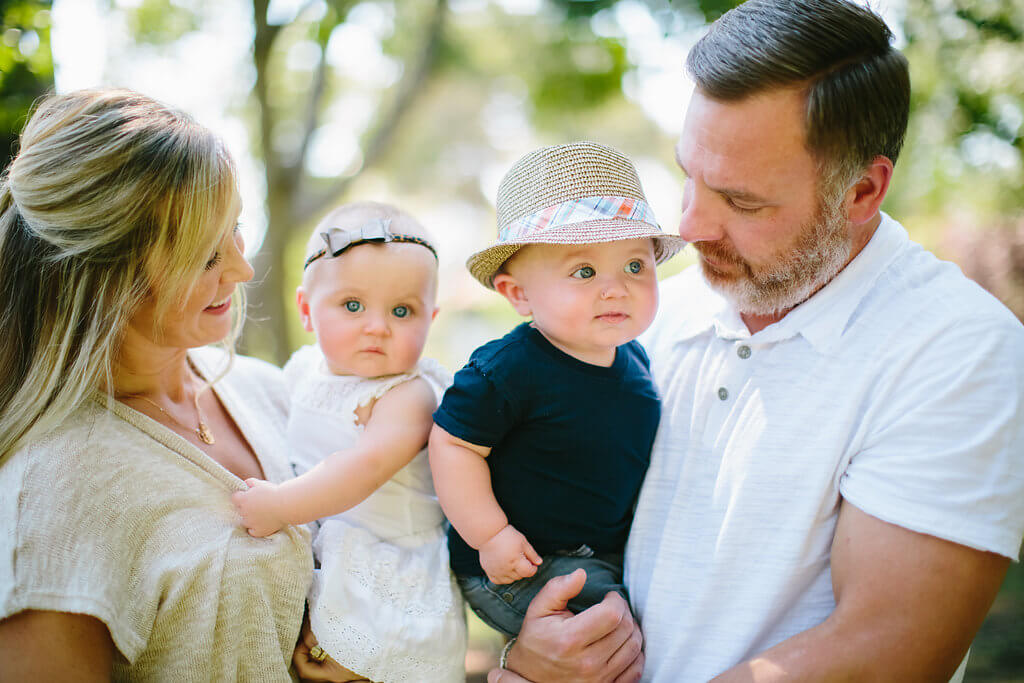 Joette lives in Dallas, TX, with her husband Justin. She’s mom to those precious 11 month-old twins, James and Josie and stepmom to two beautiful girls, Addison [14] and Logan [12].  She’s also a proud lover of animals and is mommy to Muffin, a 17-year old ShiTzu, Jackson, 7-year old Lab/Pony mix, and Tory, the 2 year old crazy cat. In her spare time she works a full time job, is a consultant for Rodan + Fields, does some fitness at CrossFit White Rock, and spends as much time as she can with her family and friends.
Do you want to share your story of motherhood with others? Do you have a momspiration you’d like to nominate to share their story and encouragement? Email us at [email protected]!